Why should you join a Network State?

This is Part 2/5 of my essays on the Network State for the Tech Progressives Writing Challenge, also join build_ to connect.

For me, the most fundamental improvement of a Network State over a Normal State is the citizen experience with like-minded individuals who share a real purpose. In Part 1 I stated:

Thus, I state that the main reason anyone should join a Network State is the cluster of like-minded people. If the purpose of a Network State resonates with you and you see potential in the Network State fulfilling its purpose, you should take the opportunity and join as you will profit from future Network Effects. This has been proven over and over again by history, as a quote from the Book The Geography of Genius states:

“Geniuses do not pop up randomly—one in Siberia, another in Bolivia—but in groupings. Genius clusters.”

Paul Graham already wrote about this phenomenon in 2008, but I will adapt his words a little bit: Great (cities) Network States attract ambitious people. He also found that different cities send out different “messages” to people. This “message” of a city is the “purpose” of a Network State. Graham identified 10 different “messages” or purposes in our case, which ambition people tend to be attracted to: wealth, style, hipness, physical attractiveness, fame, political power, economic power, intelligence, social class, and quality of life.

Therefore I believe that Network States will be clustered around these different purposes, but I am not sure about the structure. I see two main models emerging:


Most probably there will be a mix of different forms, and people will be citizens of many Network States over their lifespans, similarly to how people move from city to city. Thus, the next question emerges.

Which Network State should you join?

That’s obvious - just close your eyes, trust your gut and pick a random one. Classic crypto-investor strategy by the way. Also a good tactic - decide by colour.

Ok, sorry for that :-) My very bad jokes aside, balajis actually proposed that every serious Network State should have a public dashboard. The difficult part is that a Network State can track thousands of metrics and it is difficult to pinpoint the most crucial once. The cool part is that such a dashboard would actually be possible with a governmental blockchain.

Here are my first thoughts on how something like a Network State dashboard might look like. I urge you to read my initial thoughts and then add at least one more idea or useful metric in the twitter post linked at the bottom of this blog.

Most of the metrics should be bottom-up, meaning that every citizen should have a wearable which tracks the data. This would allow every citizen to have his own personal dashboard. Further, every location could have their data pulled together to see their own metrics. Finally, the metrics would merge into a Network State dashboard.

To be honest I would love to implement something that would measure our holistic lives. Unfortunately, this is not that easy and I still search for the best metric system. Nevertheless I still came up with some ideas. I separated the metrics in 4 Parts, 3 by metrics and 1 by visuals. The metrics are divided into Economic, Demographic & Living, Health. The visuals are more like a moodboard from socials and other areas of the citizens' culture like music, history, art & design, literature & philosophy, sports, cuisine and media. 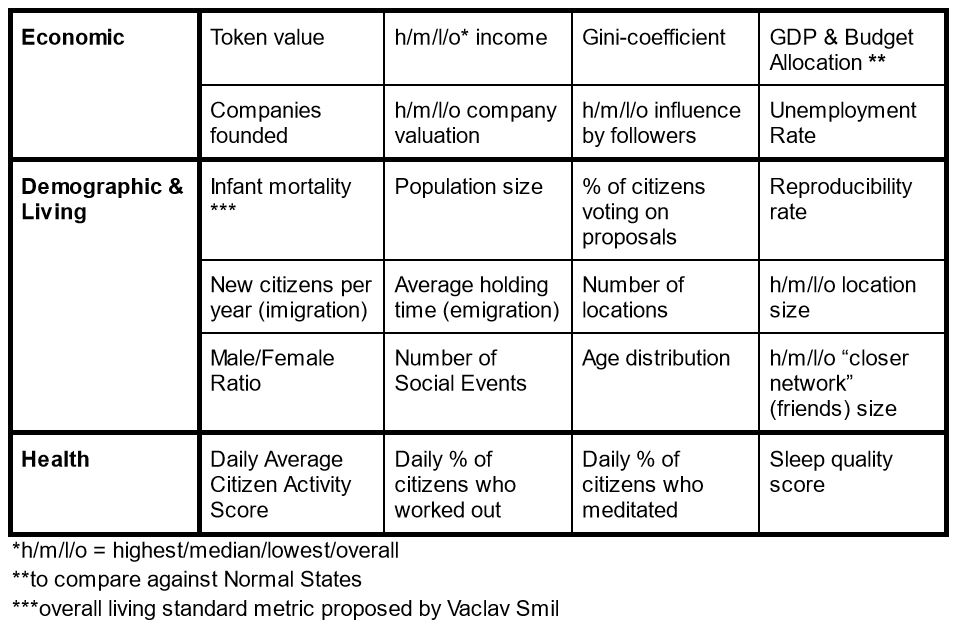