When will we live in the Network State?

This is Part 4/5 of my essays on the Network State for the Tech Progressives Writing Challenge, also join build_ to connect.

In Part 1 we jumped a bit in the future and tried to understand the fundamental improvements of a Network State over the Normal State. In a way we stated that once the Network State will exist, it will be “Better, Faster, Cheaper” than the Normal State, thus an improved version. However, how can we even be sure that this idea will even be realized? The future is so uncertain.

How to predict the future?

Hmm, If I only knew…

“It seems to me that beliefs about the future are so rarely correct that they usually aren't worth the extra rigidity they impose, and that the best strategy is simply to be aggressively open-minded.”

But how does he determine which idea to invest in?

“Another trick I've found to protect myself against obsolete beliefs is to focus initially on people rather than ideas. Though the nature of future discoveries is hard to predict, I've found I can predict quite well what sort of people will make them … The winds of change originate in the unconscious minds of domain experts.”

What can be a good prediction?

In our case it is Balaji Srinivasan: Balaji S. Srinivasan (@balajis) is an angel investor and entrepreneur. Formerly the CTO of Coinbase and general partner at Andreessen Horowitz, he was also the co-founder of Earn.com (acquired by Coinbase), Counsyl (acquired by Myriad), Teleport (acquired by Topia), and Coin Center. He was named to the MIT Technology Review’s “Innovators Under 35,” won a Wall Street Journal Innovation Award, and holds a BS/MS/PhD in Electrical Engineering and an MS in Chemical Engineering, all from Stanford University. Balaji also teaches the occasional class at Stanford, including an online MOOC in 2013, which reached 250,000+ students worldwide.

I think if we were to give out credibility points, you could give Balaji 9/10. He predicted the future so many times, and proved so many times that he is capable of delivering.

Paul Graham once more said: “Live in the future, then build what's missing.”

Balaji is executing exactly in this manner. Currently he is explaining the future to interested people through his website 1729.com and at the end of the lecture series on the Network State, his will announce the Tech Tree. This will include all the technologies that are needed to be built in order to increase the chances of success for the Network State. Thus, has a clear vision of the future and just builds his way towards it.

“That describes the way many if not most of the biggest startups got started. Neither Apple nor Yahoo nor Google nor Facebook were even supposed to be companies at first. They grew out of things their founders built because there seemed a gap in the world.”

Ok, let us turn to the second point. We can say with some confidence that Balaji will be able to create the tech stack for a Network State. He has proven his competence before and has more money than ever before. Thus, the odds are definitely on his side. But what about the things that he cannot really control. What needs to be true in order for people to adapt? What are the main trends that are in favor of the Network State?


This is probably the main trend that must persist, while the tech stack is being built. The main product in this case is the “State”. The more people dislike the government, the more they will look for alternative solutions and more likely adapt to the new product “The Network State”. 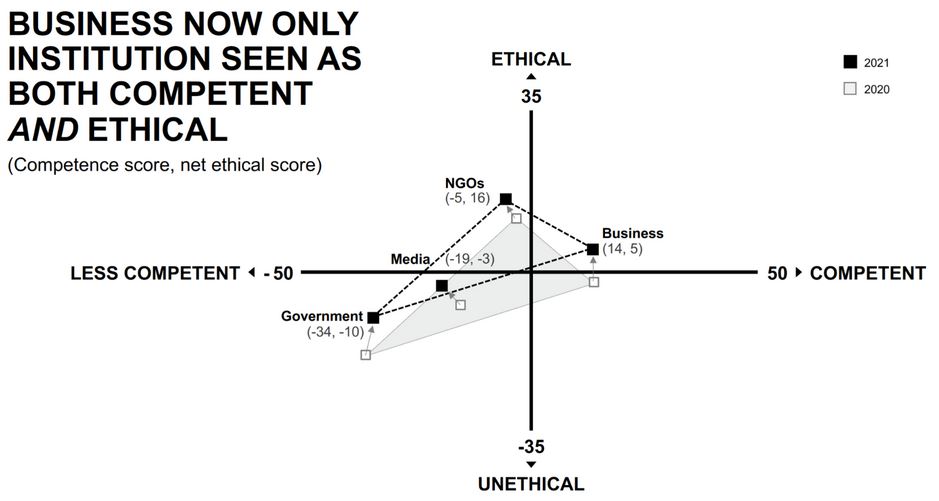 “In the United States, trust in the national government has declined from 73 per cent in 1958 to 24 per cent in 2021. Western Europe has seen a similar steady decline in public trust since the 1970s.” 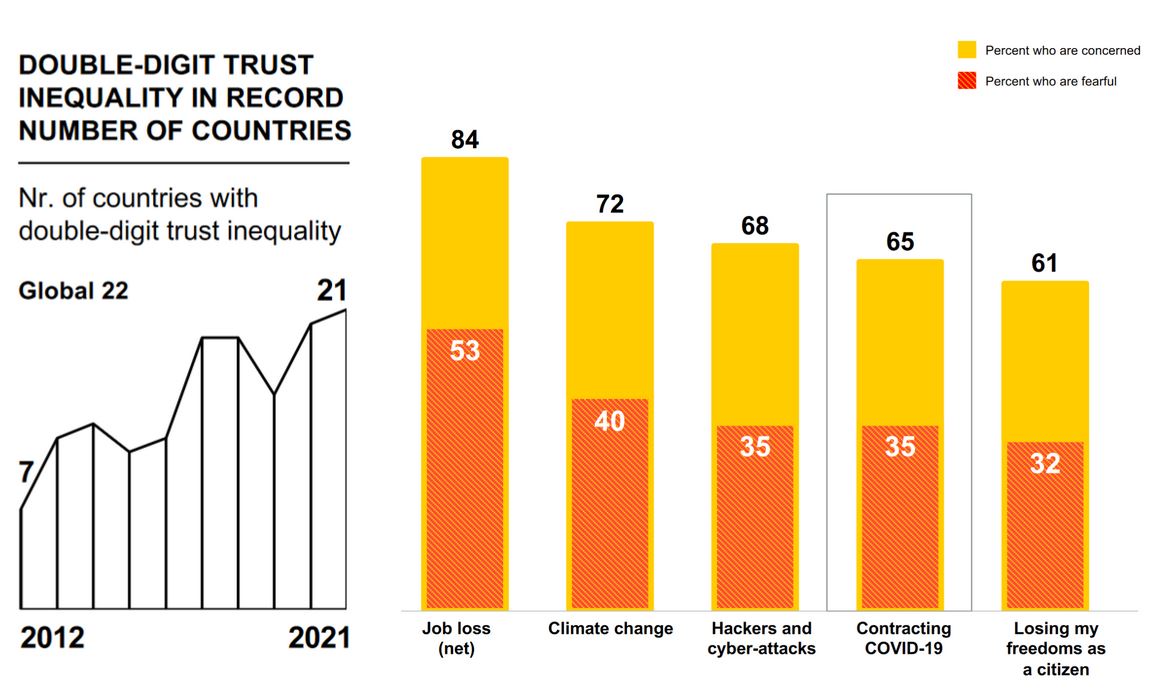 Even though, for “us”, tech-progressives are an obvious trend - it is not so obvious for other citizens. The numbers from the McKinsey report clearly show how the covid 19 pandemic actually increased the adoption by very high percentages. 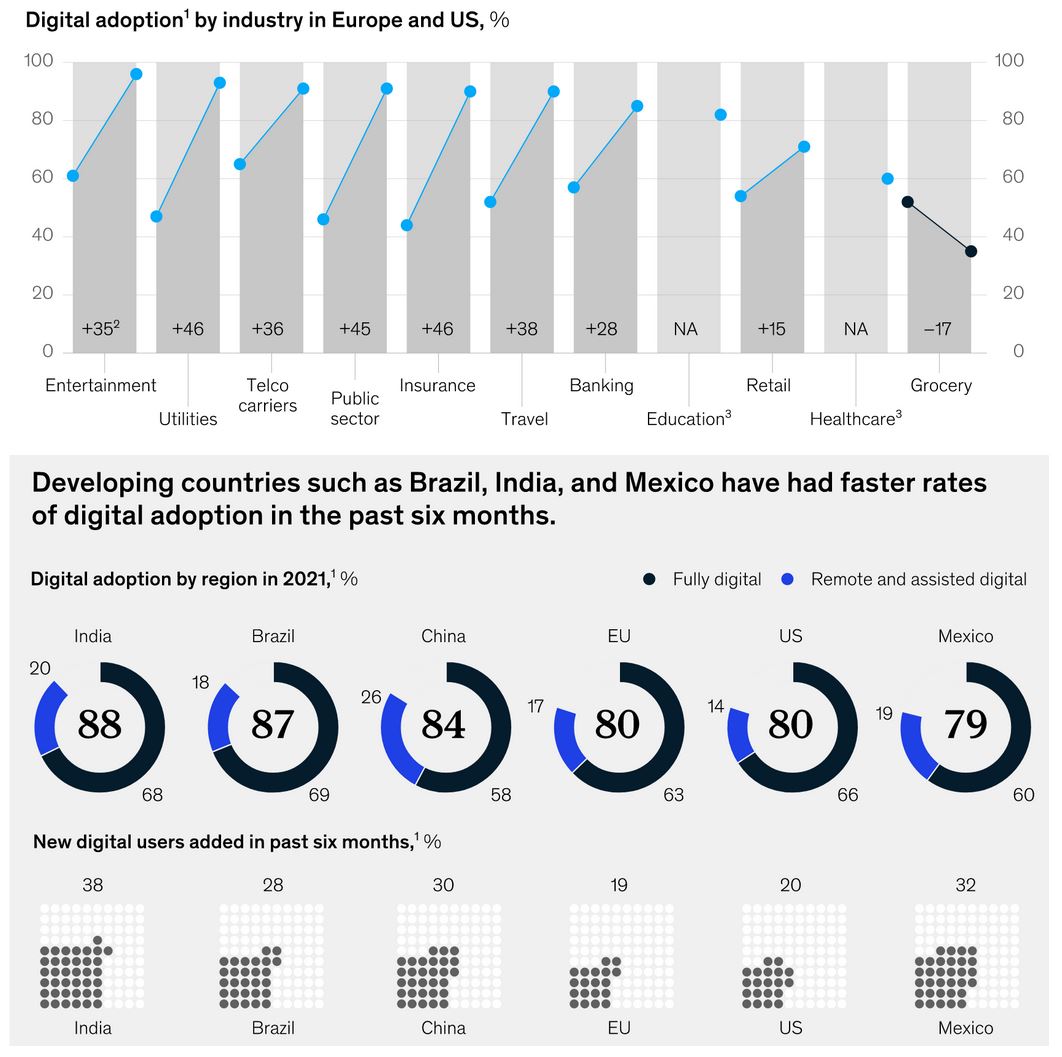 The third trend is adoption of crypto. This trend also shows to be very promising at the moment. According to this survey by chainalysis, the year 2021 was the most important one for cryptocurrency in terms of adoption rate. Nevertheless, this trend must strongly continue in order to create a global system based on cryptocurrency, as currently still only around 4% of the world's population hold crypto, according to this article.

To summarize we can say that from a maturity standpoint we could rank the trends from most mature to least mature (Virtual World, Distrust in Government, Crypto Adoption). Especially crypto adoption still has a long way to go if you look at the macro trends. So if crypto is still even in the “Early Adopters Phase”, what timeline can we expect for the Network State? 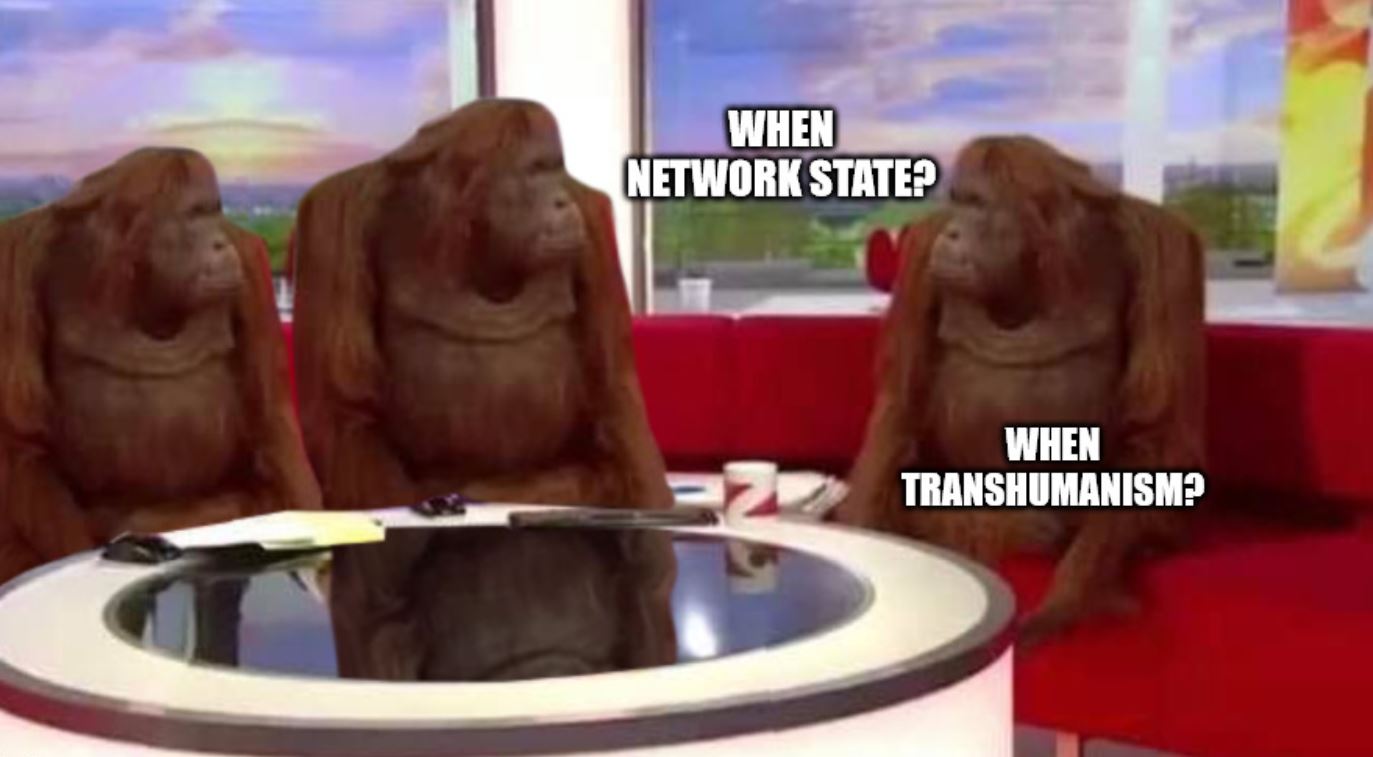 This is probably the most difficult part and definitely not really predictable, that's why the monkey. Still we wanted to try out this concept and look at the implications. The Bass Diffusion Model consists of a simple differential equation that describes the process of how new products get adopted in a population.

First we derived the p and q values, from indicators from wallet adoption. We chose wallet adoption, as this metric shows some similarity to the core ideas of the Network State. However, the adoption of the metric state will potentially be slower, as it is more complex. 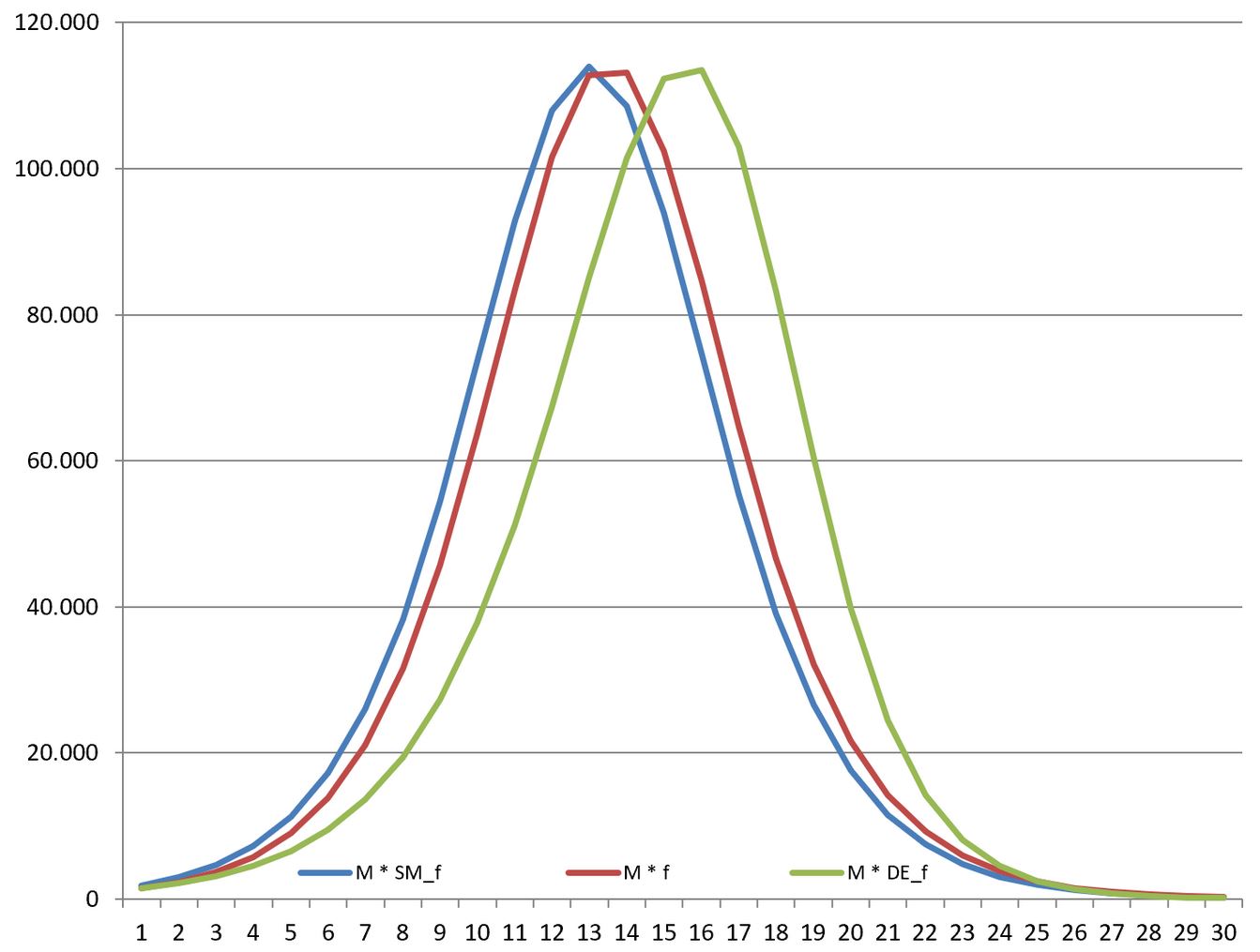 What do these values tell us about the adoption?


We got a low p value and a high q value, historically this could be compared to the adoption of new medical devices or other radically new devices. The theory says that for patterns like this, the barriers of adoption are high and forecasts are not easy. Though once accepted, the adoption rate takes off quickly. Also, the model indicates that there will be adoption through imitation. Therefore there is a big need for social observation. The theory says an important strategy is “getting attention” and using first adopters as opinion leaders. The theory is actually very close to what balajis is proposing in his strategy of adoption.

All in all, we can clearly establish that the trends are rather in favour of the Network State becoming a reality one day. The indicators show that the founder is strong and the trends are going in a Network State favourable direction. Timewise we think that there is still a long way to go and the indicators show that we are at the VERY BEGINNING. Firstly, crypto adoption has to get into the masses, which can take around 5-10 years more. Secondly, the Tech Tree of the Network State has to be built. Thirdly, only once crypto adoption is high and the infrastructure is ready, adoption for the Network State will start. As the model shows us, we might expect it to take around 12-15 years to become “cool”. Obviously, this can rapidly increase with today's influence of social media and an escalation of the trends. However, a realistic scenario would be that this will take around 15-25 years until we “Innovators'' are citizens of the first Network State “1729”.

I know this sounds silly, but this is kind of a bummer right now. When writing the first 3 parts I fully emerged in the vision and was almost ready to pack my backpack and move “into the metaverse”, but the numbers brought me back to reality and the ground of hard facts. Nevertheless, despite the long time, uncertainty and difficulty of the journey, I fully embrace it. 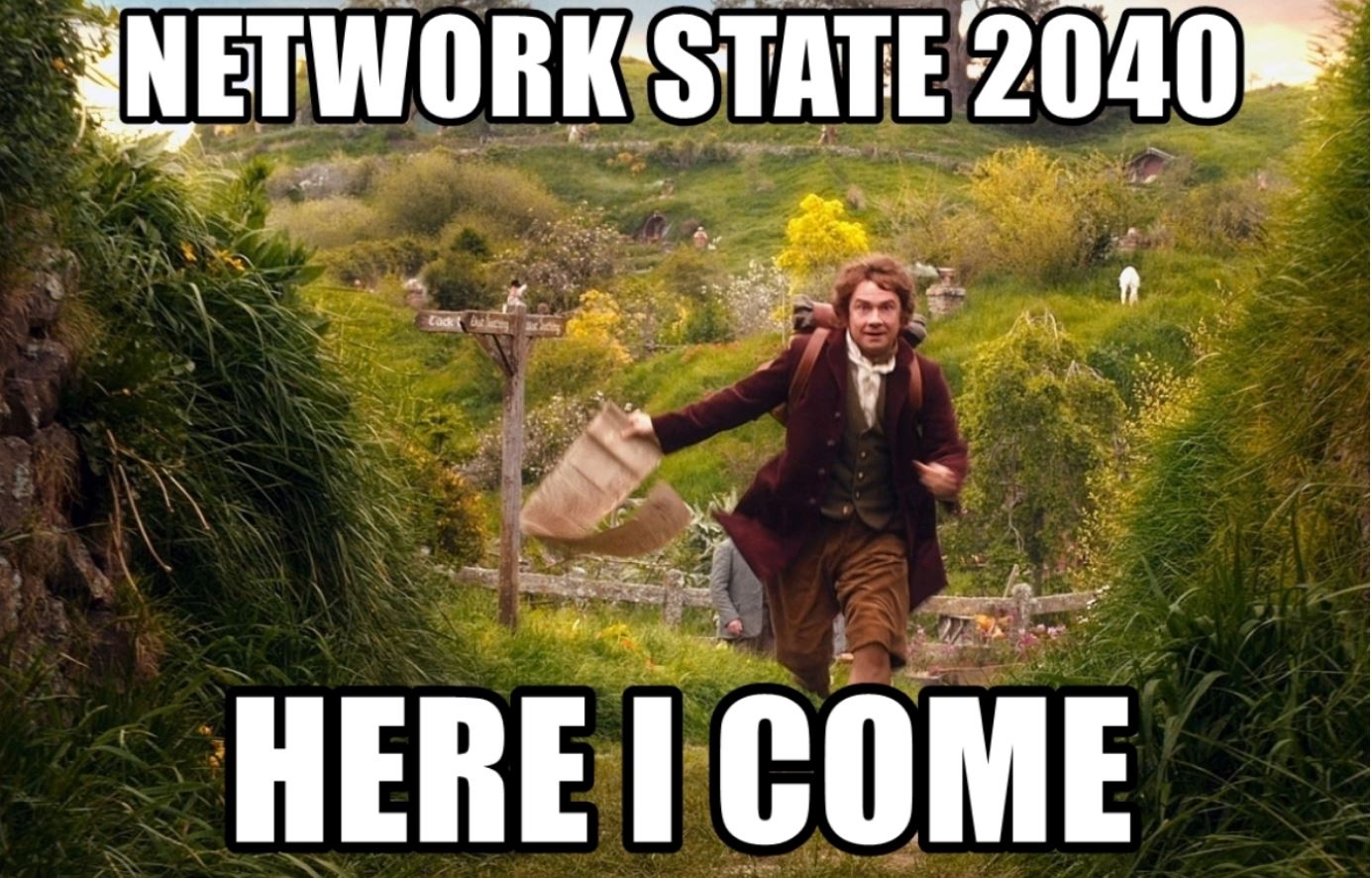